Home > About Us > Our Stories 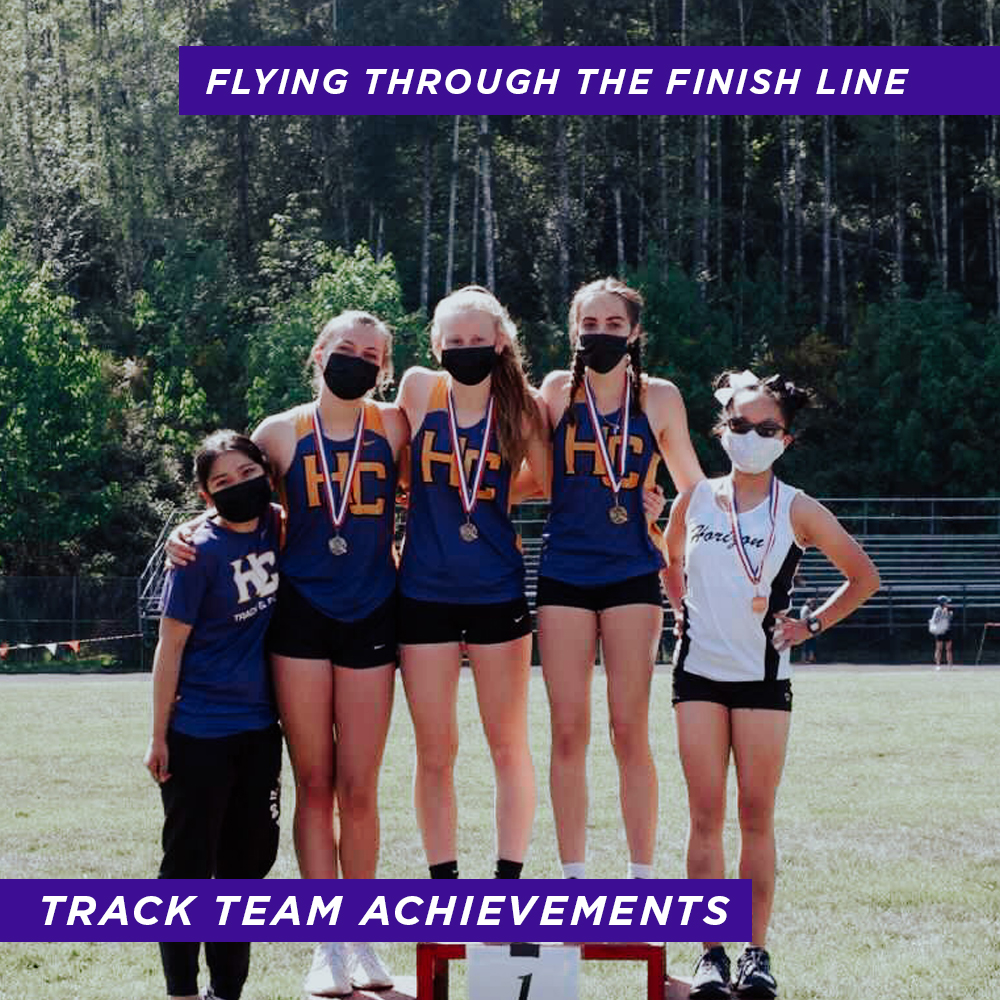 What an incredible track and field season it has been at our high school!

Our girls team hit it out of the park this year by scoring 143 points at the District Meet, beating all the other teams by 53 points. What an impressive win! The girls finished 6th at the State Meet, which is the highest finish by a Horizon Girls team ever.

Cassie Wedin got 3rd in the Triple Jump and 8th in Long Jump. 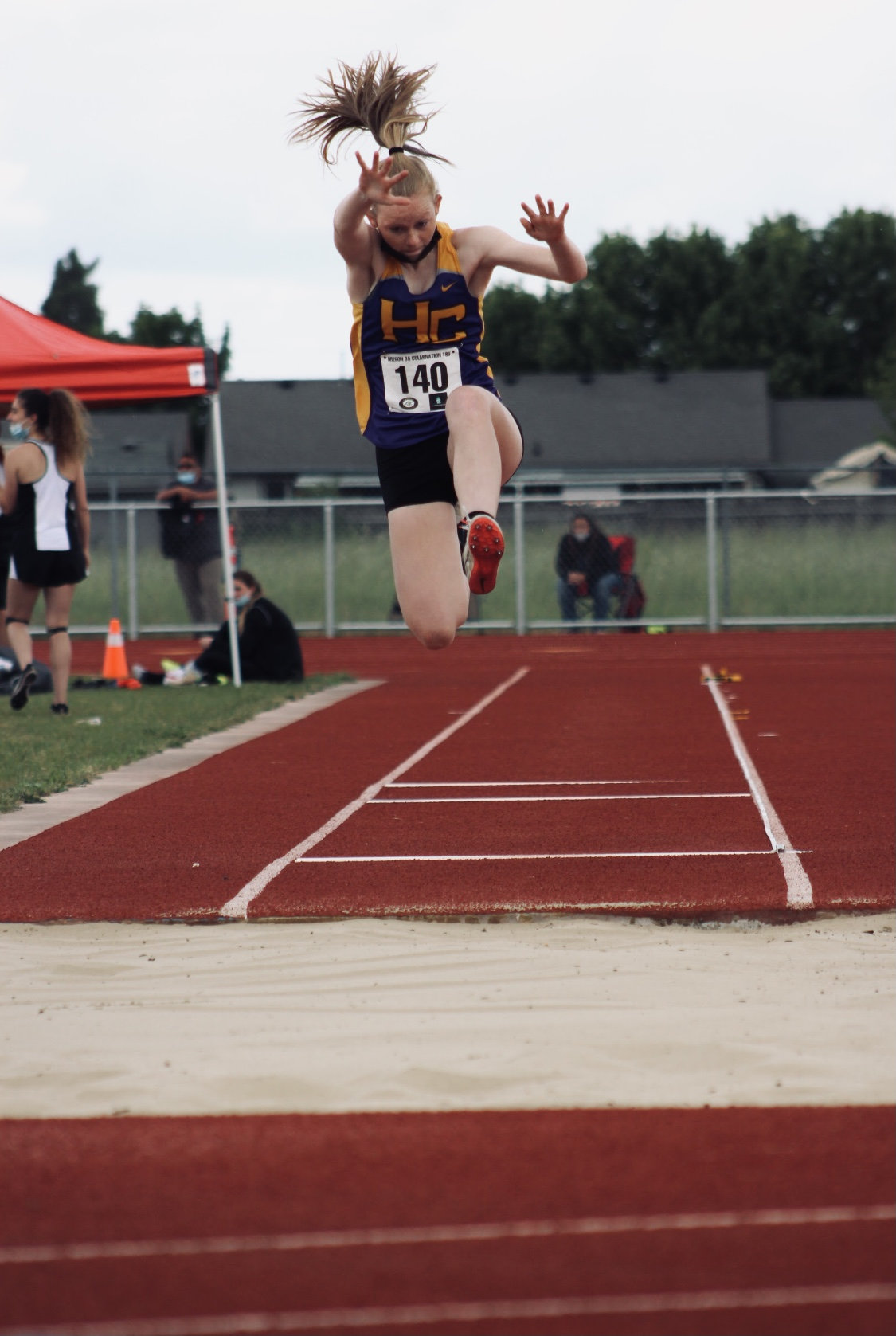 Our boys finished 6th at the District Meet where Micah Clements won the 110m Hurdles and got 2nd in the 300m hurdles at Districts and then got 7th in the 110m hurdles at State. Way to go boys and congratulations, Micah! 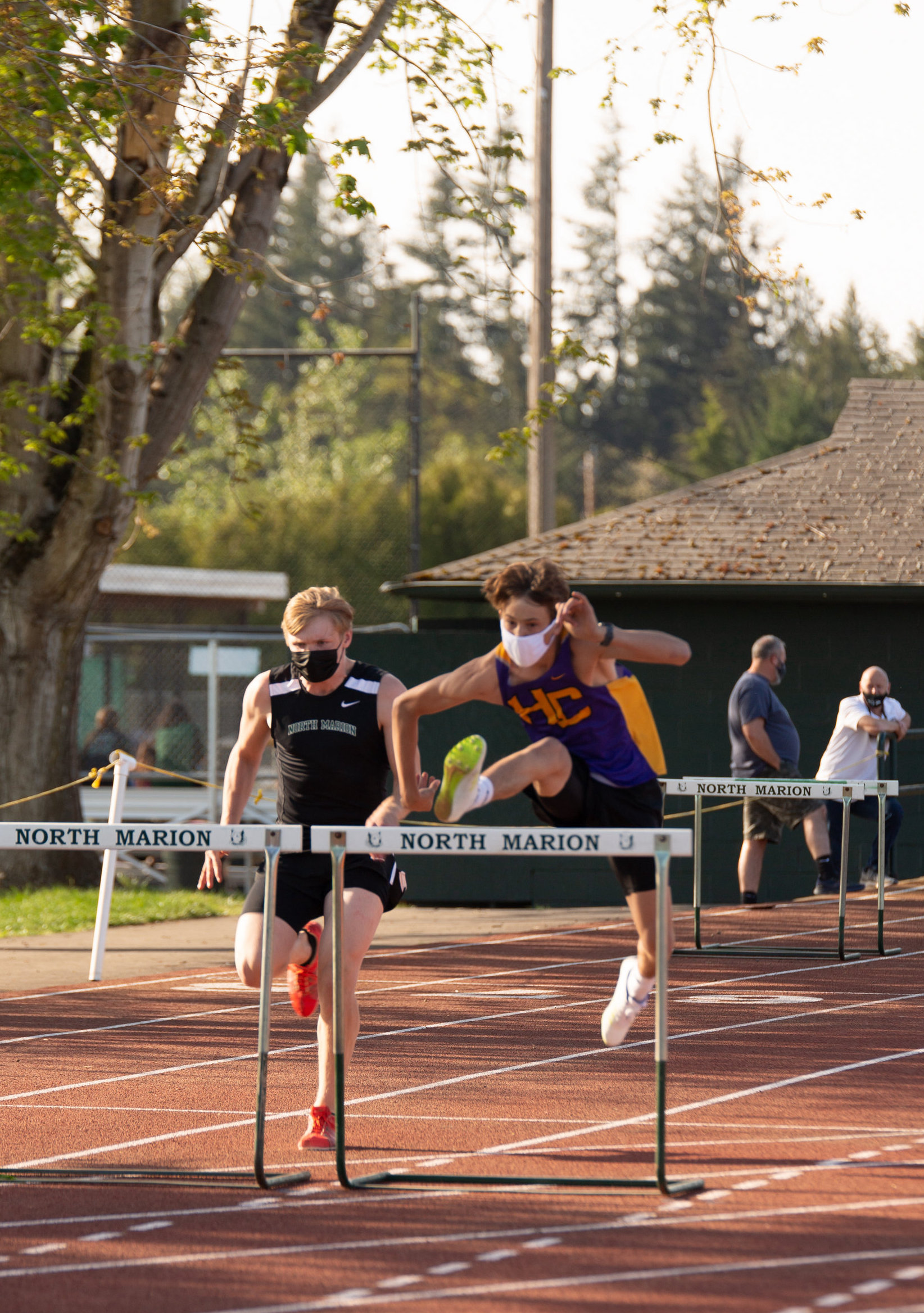 The students are coached by some amazing people who love the sport and love to help students succeed. Josh Platt is head coach as well as the distance coach, Scott Olson is the jumping coach, Tucker Olson is the sprints and relays coach, Will Shelby is the javelin coach, and Abriana Wedin is the discus and shot put coach.

With nearly 35 students on our track and field teams, students have discovered a place where they are not only challenged and pushed to 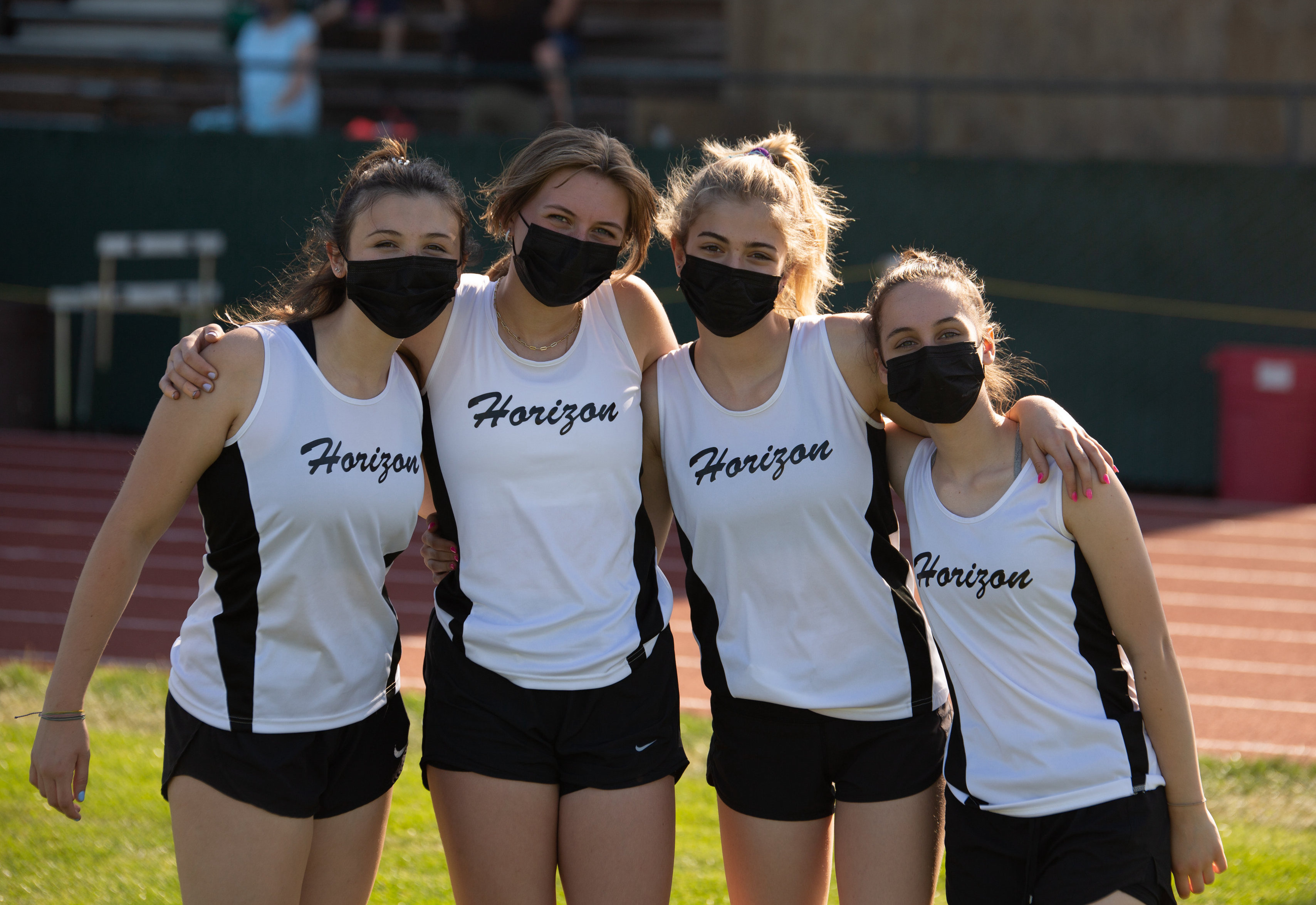 achieve their personal record (PR), but to also support each other both on and off the field. The kids have a blast in a very supportive community of students, coaches, and parents all encouraging and rooting for them along the way.  It is definitely a place "Where Everybody is Somebody and Jesus is All" and where students are continually discovering how much they matter to each other and how they are loved by the Lord.

We are so proud of our track and field competitors and their awesome accomplishments this year. Go Hawks! 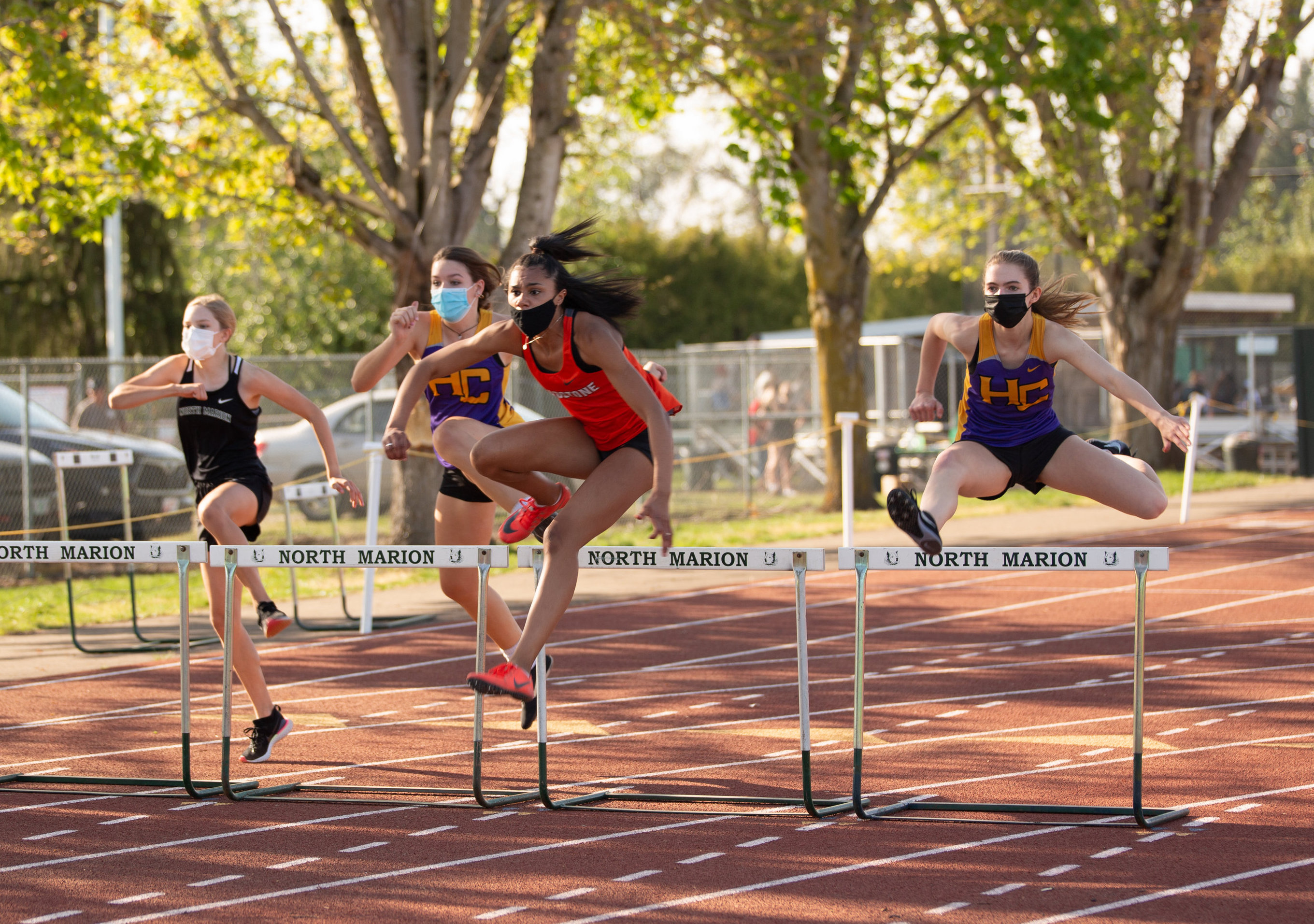 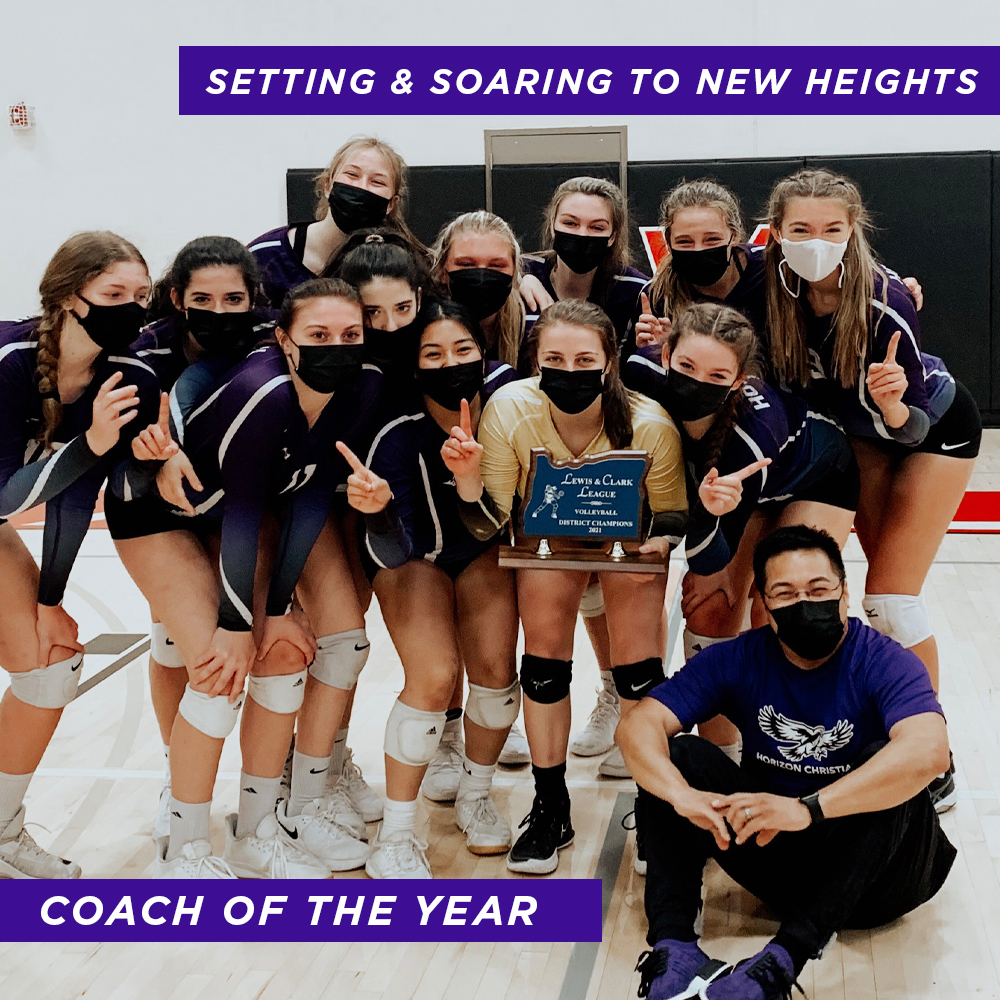 Coach of the Year - Jay Lazaro

“Forgetting who you are and making everyone else great” is the coaching philosophy of Jay Lazaro, our amazing head volleyball coach at Horizon Christian School. “Leaving no one behind and taking the whole team with you” is what defines him as a coach and inspires his players. Over the last three years as our head coach, Jay’s players have loved his heart, style, and unmatched experience as a strong leader in the sport.

Jay’s love of volleyball goes back to his early days in the Philippines and on through to California when, as a junior in high school, he was asked to “teach” the volleyball class while the “teacher” listened to baseball games in his car. This got him hooked! In 2008, Jay moved to Oregon where he was invited to coach club sports and he has never looked back. In 2012, he started his own club in Sherwood, called Empower, and he is currently traveling as a National Team Coach for college recruitment teams, where he helps develop players to get them recognized by college recruiters. 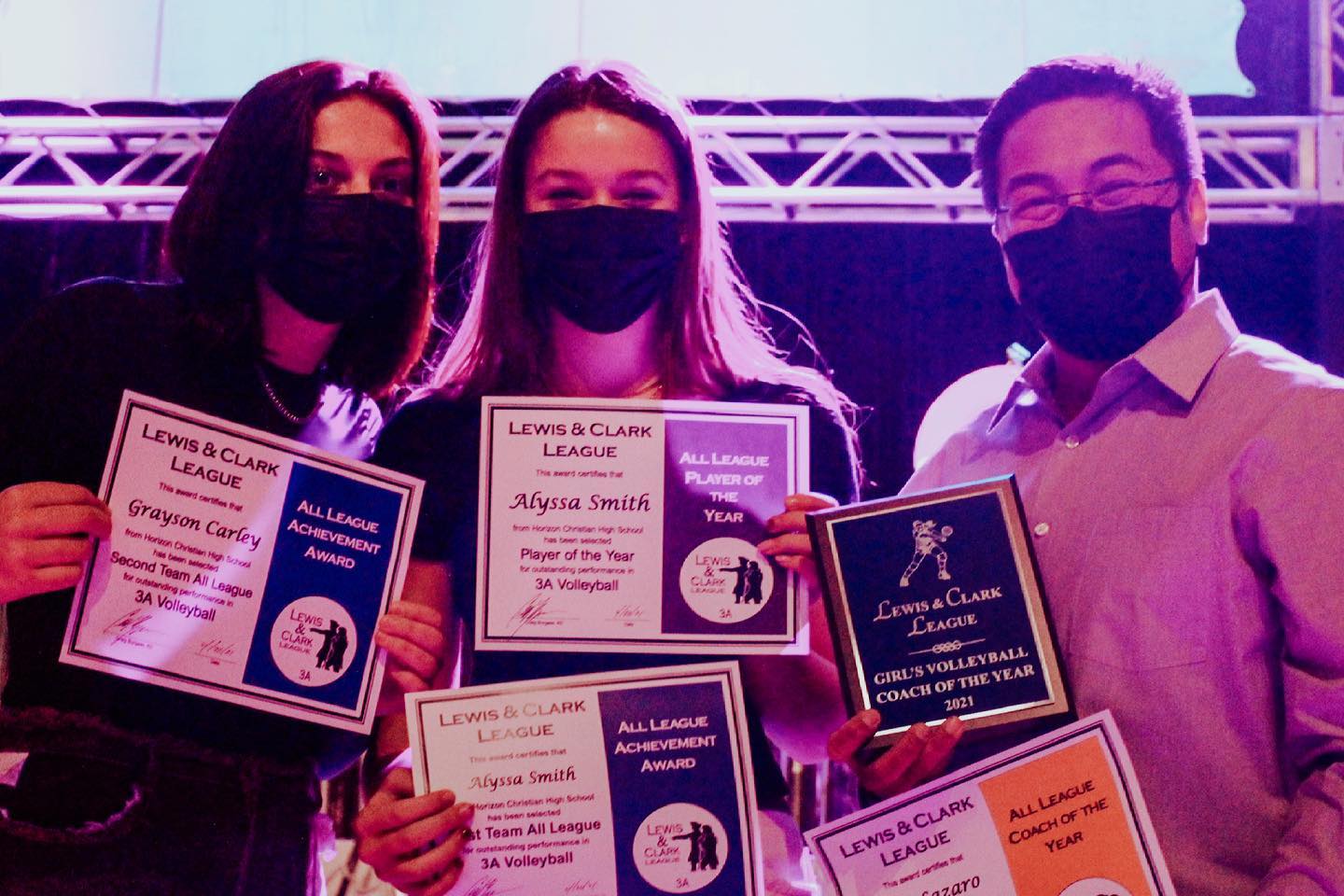 All three years as coach, Jay has led his teams to 1st or 2nd place in League and they have won the League Playoffs the last two years. Each year they have made it to State: 6th the first year, 7th the second year,  and then this year, with their best team yet and having won the League Playoffs again, they were set to do extremely well had COVID not prohibited the State Championship tournament. Winning League and League Playoffs, let alone going to State, is not an easy task in high school sports and we are extremely proud of Jay’s leadership and the hard work of our players. 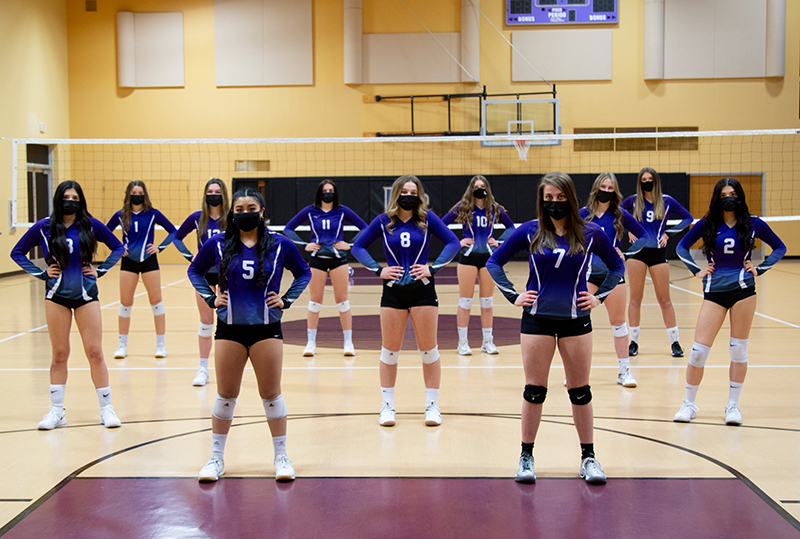 In the three years that Jay has been coaching at Horizon, the interest and passion for volleyball has skyrocketed among our Horizon Christian girls and allowed for both varsity and junior varsity teams. He is outstanding at taking players from basic to advanced play, and bringing out the very best in each team member. 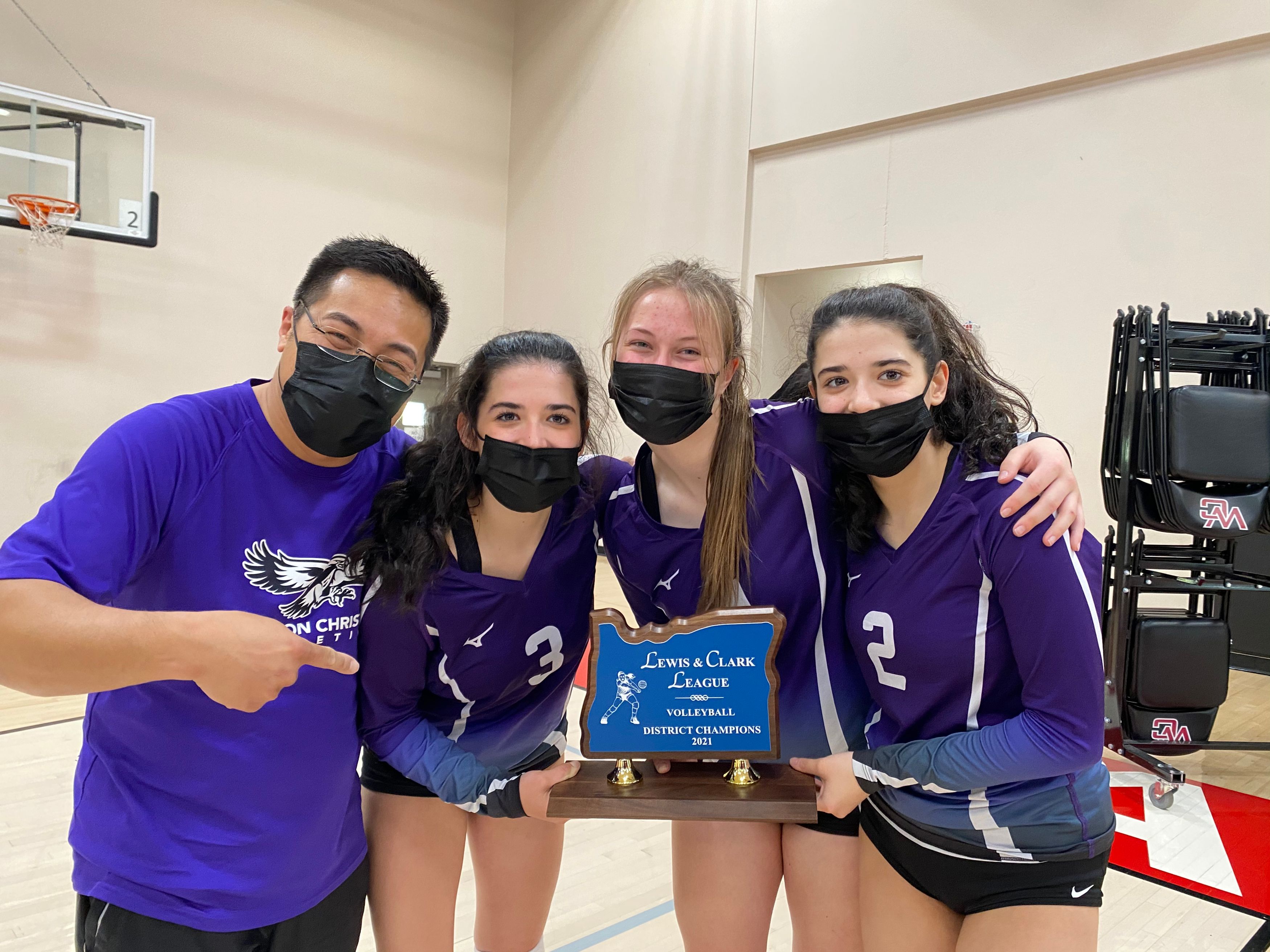 We are so thankful for Jay’s heart, passion and love for our school and his team.

Volleyball is a fall sport, and we invite you to come check out the teams in September.

Posted in Life at Horizon Christian 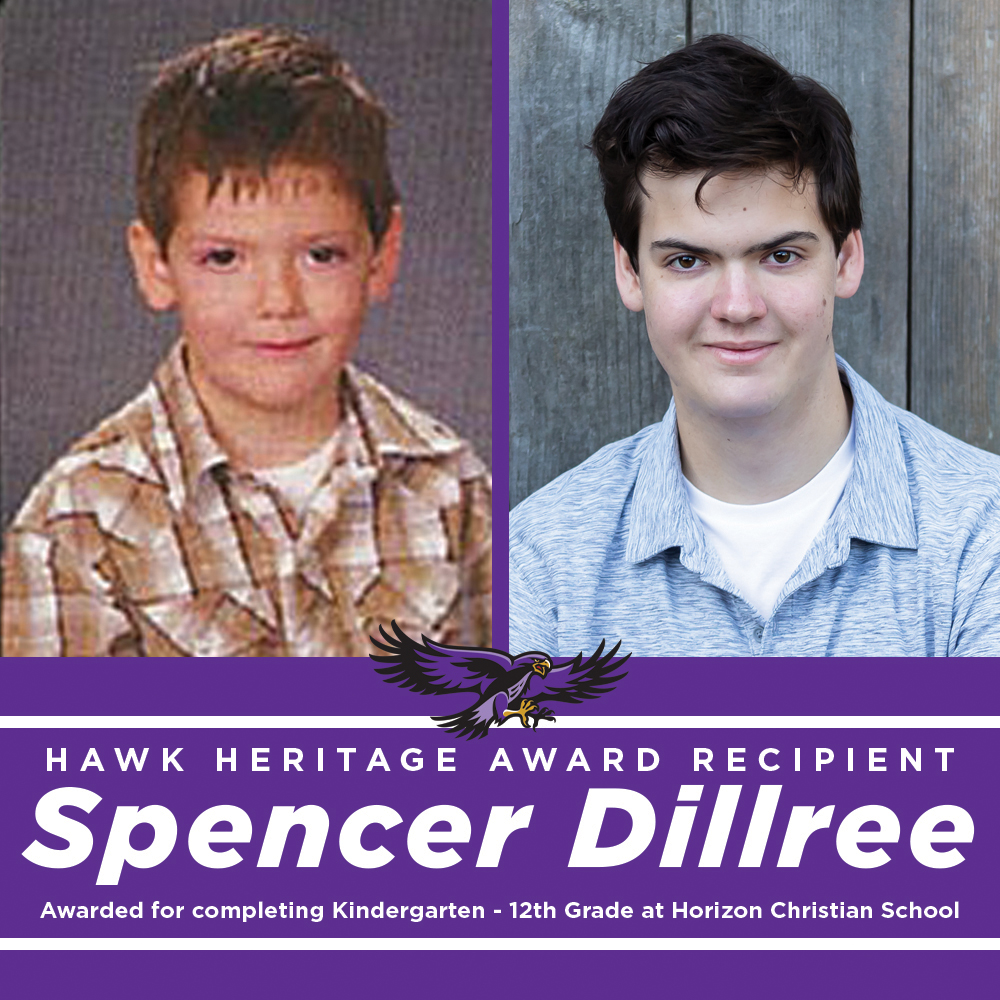 Spencer will be attending the University of the Incarnate Word, with both a merit scholarship and a D1 fencing scholarship, where he will be studying graphic design.

Spencer has always liked to draw and paint and through extensive art classes at Horizon and with the encouragement of teacher, Tiffany Redwing, Spencer as grown in this passion and plans to use what he has learned in his future career.

When asked what his favorite memories are of Horizon Christian School, he mentions both Color Wars and our annual high school retreat. The two great events are designed to draw the students together in community, comradery, and competition. They often get mentioned as favorite activities for the kids. Let’s see which grade level wins Color Wars this year!

Spencer’s encouragement to younger students is to work academically to earn good grades and get immersed in school as much as possible as he knows that school is more fun and a greater experience when you are involved.

We are so thankful for our students like Spencer Dillree, who attended Kindergarten through 12th Grade, and for the legacy they are leaving behind. 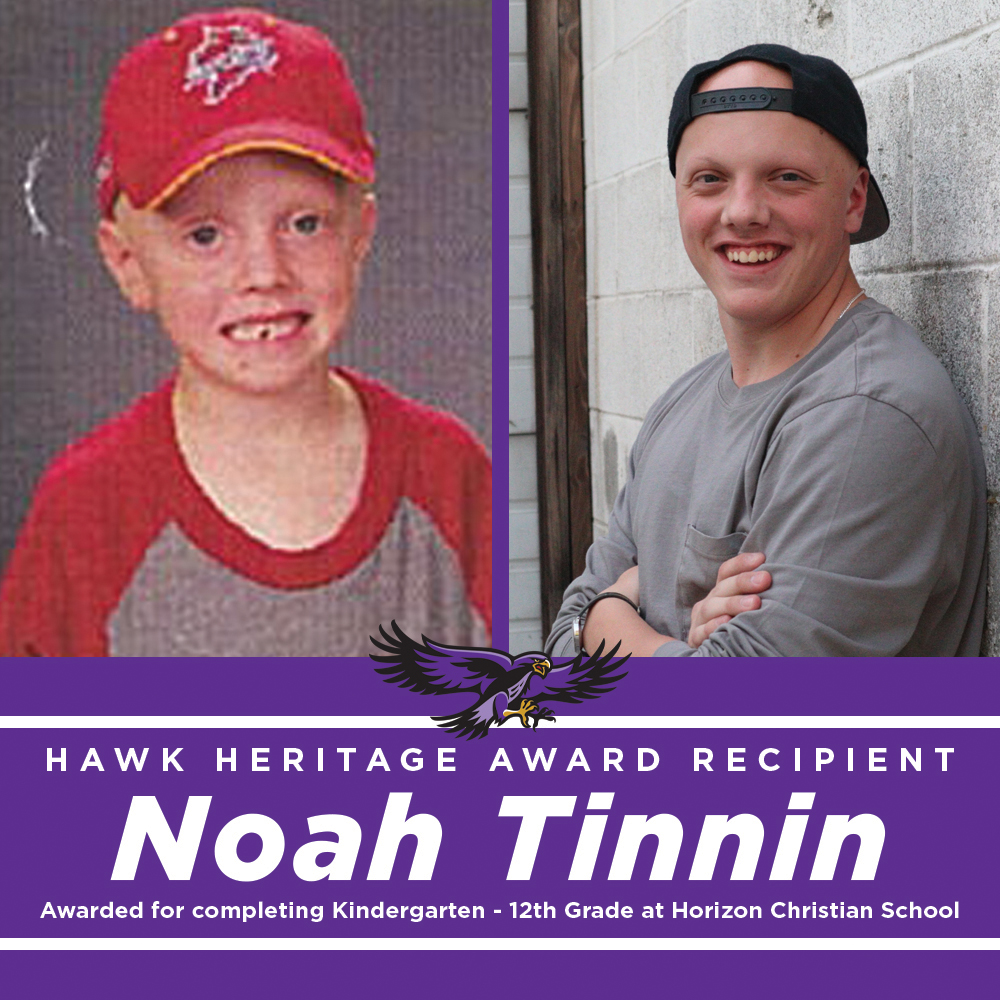 Noah plans on attending Grand Canyon University where he plans to study either digital arts or sports nutrition and/or physical training.

Photography and P.E. have been his two favorite classes and set the stage for his future plans. He developed an interest in digital arts through his yearbook and photography classes with Ms. Redwing, who opened up this exciting world to him. Through his P.E. classes, and several years on the track and cross-country teams with Coach Josh Platt, he has grown a passion for the physical and nutritional aspects of these sports.

Two of Noah’s most memorable moments have been when he got a 215 pounds bench max in P.E. and the other is the fun of being a part of the track team and the incredible feelings he gets running the 4 x 400 relay with other teammates are depending on him and cheering him on.

When asked what his advice is for younger students at Horizon, Noah said, “Stay true to yourself, don’t give up and always work as hard as you can.”

We are so thankful for our students like Noah Tinnin, who attended Horizon Christian School Kindergarten through 12th Grade, and for the legacy they are leaving behind.

Great job hitting 215! God grace be with you at GCU! 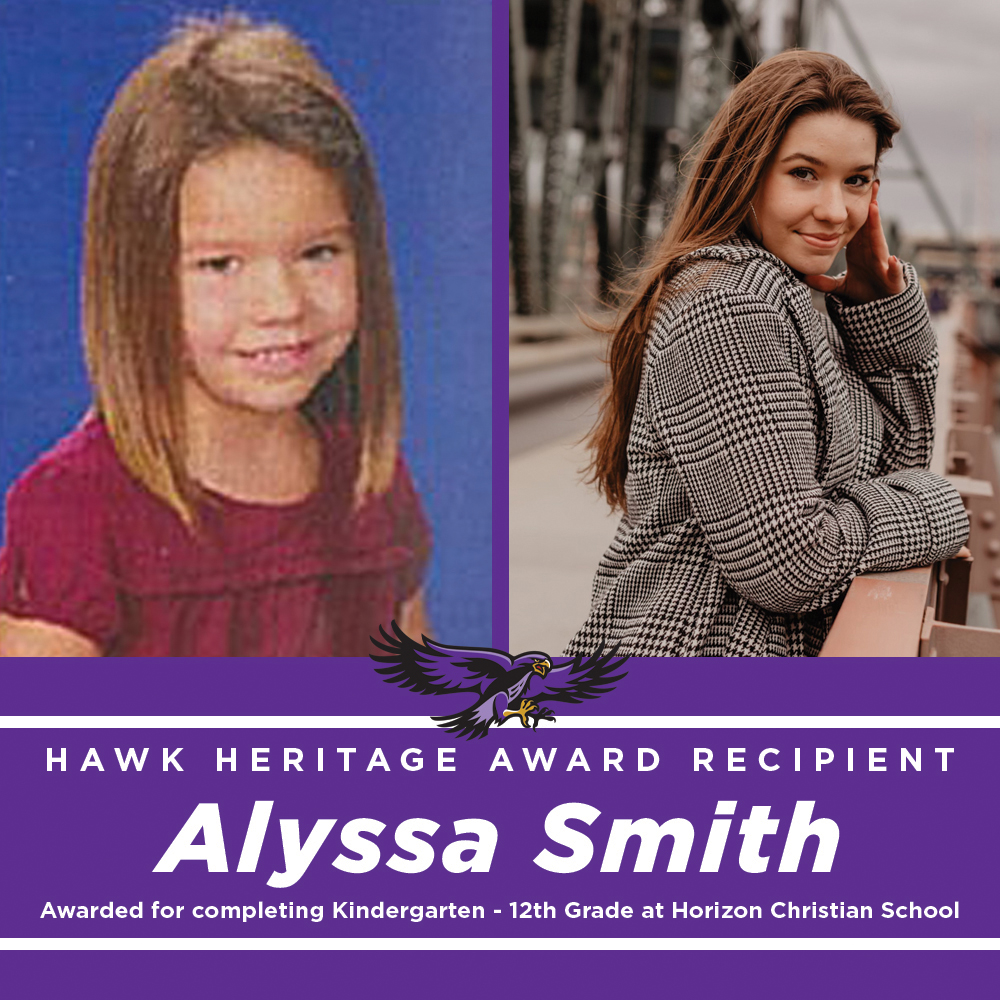 Alyssa plans on attending Grand Canyon University where she will be studying Nursing.

Her two favorite classes were Mr. Burgess’ History classes and Mr. Custis’ Bible class. Alyssa explains, “Both Bible and History were taught in a way I had never been taught before and I thoroughly enjoyed them and learned a ton!”

Her most memorable moments were the All Nighters and Color Wars which Alyssa described as an absolute blast, “But nothing beats the feeling of my sophomore year when our volleyball team walked into that gym at state and practically our whole school was there. We broke the state attendance record and even canceled school for that first state game. The support and excitement from that game is unmatched.”

When asked what advice she would share with younger students at Horizon, Alyssa said, “Don’t settle. Horizon is the perfect environment to challenge and push yourself because everyone, teachers, staff, and students are rooting for you and are there to help. Whether it be going out for a sport or club you never had before or taking an advance class, do not settle. Some of my favorite memories come from areas where I tried something new or something that made me nervous, and I am so glad I did these things. I would also emphasize to be involved: go to events, participate in class activities because you will never get these four years again. Do not waste them!”

We are so thankful for our students like Alyssa Smith, who attended Kindergarten through 12th Grade, and for the legacy they are leaving behind.

Posted in Student Highlights
1 comment
Zach Lucas says:
Nursing is a great way to serve! Great job in all you've done at Horizon.

Have a story to tell us about your experience at Horizon Christian School?